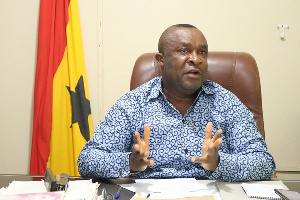 The District Chief Executive (DCE) of Krachi West District in the Oti Region, Douglas Ntim Osei, said the district has potential in sport, specifically, football hence the need to put measures in place to advance it.

Mr. Ntim Osei mentioned that, since he became DCE for the area, he has carefully observed that “the district abounds with talents in sports”

He revealed that “In 2018, the Under 13 (national football competition) Krachi was third; then Under 15, 2019, were also first. We defeated Central Region and became first in the whole country. So when it comes to the issue of sports or football, we have a lot of talents in our district.”

The DCE, however, appealed to the Ministry of Sports to “also look at Krachi West to give us one of the astroturf to help us boost our sports potentials.”

He believed that the initiative, when achieved will help create jobs for youth in the district.

“I believe that, if one of these astroturf being built around in the country we are given one, it will help us perhaps even train our boys better and then some of them can be finally referred to Under 17, National Under 20, the Under 23 and even the Black Stars and it will equally help to get the youth also be employed from their own talent that is why I am making this appeal to the Minister of Sports,” he said.

Mr. Ntim-Osei emphasized the need for the government to continue the good work started in the Oti Region, adding that, when given a second chance to serve the people of Krachi West, he will continue to prioritize education, rural electrification, youth employment, and empowerment and development in general.