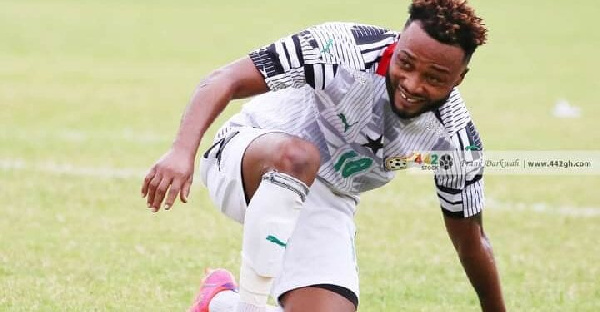 • Charles Taylor made 16 appearances for the Black Stars

According to the former Black Stars player, Gladson Awako is in a better position with regards to current form to play for Ghana than Mubarak Wakaso who has not been active in club football in the last couple of years.

Awako has been a constant figure in the Black Stars under coach Charles Akonnor but the former Accra Great Olympics captain was dropped from the squad to face Ethiopia and South Africa in the FIFA World Cup qualifiers.

But reacting to the Black Stars 1-0 defeat to South Africa and the backlash on Mubarak Wakaso for his back passes in the game, Charles Taylor opined that Gladson Awako wouldn’t have done better than the China-based player.

“The Black Stars National team is not for anybody, if you say it people will say you are hating.”

“Awako is currently a better player than Mubarak Wakaso, he protects the ball better and passes the ball well than Wakaso. His tackles are not good, I’m stating a fact but Awako can do it better than him and deadly when with ball and when to release it,” Charles Taylor told Angel 102.9 FM.

Fitness centres without certified instructors to be shutdown – Association