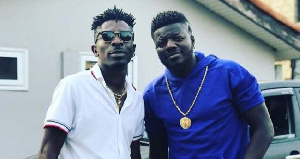 •The two artistes have been engaged in a prolonged fight

Rapper Pope Skinny has stated that it is high time he and his rival, dancehall musician, Shatta Wale, make peace adding that the friendship they had in the past was “beautiful”.

Pope Skinny who has been caught in a beef with the Shatta Wale has said that they should forgive each other and live in harmony.

Speaking in a viral video available to GhanaWeb, the rapper who was captured in his car with a lady beside him noted that there was no point in beefing his former friend.

Pope Skinny of “Asuoden Music” in his message to the SM Boss said they should cease fire and also forgive each other.

“Wale, we had a beautiful relationship. It was appealing to a host of people, so let’s put behind all our grievances. Within your heart, if you feel I haven’t done you bad, then that’s exactly how I also feel. So let’s forgive each other, let’s cease-fire,” he said in his appeal to Shatta Wale.

Before their rivalry back in 2019, the two artistes were best of friends in the music industry. They have collaborated on songs like “Hot Cake” and “Mayatra”.

My style of music is distinct – Kwame Yogot