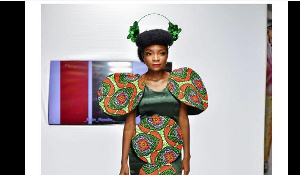 Natalia Dzidulali Attivor, Creative Director of women’s wear brand, Eledzine, has shared how she successfully built her fashion empire after spending years studying in school to become a doctor.

Interviewed by Dorothy Cornelius on the Weekend Rush on Y107.9FM, she confessed that around age 15, she developed a passion for fashion, however, she did not think it would be something serious so much that she would become a full-time fashion designer instead of a doctor. “I only told myself that I wanted to become a fashion icon so I would always combine clothes that would make me stand out for any occasion and when I was in my third year at the university, I started modelling for a clothing brand because it was kind of in line with becoming a style icon as I wanted to be,” she said.

However, Natalia continued through medical school and got the opportunity to become a Physician Assistant while still in school. She revealed that during her final year, there were a few challenges that made her believe she was not going to graduate, hence, she enrolled in fashion school although, later, she did graduate.

She intimated that sometimes, certain challenges come up to put people on their right path because from her experience, if not for that challenge which made her believe she was not going to graduate from medical school had not come up, she would not have enrolled in fashion school to become the woman she is today.

“If not for that particular challenge, even though I had fashion design in mind, I hadn’t really thought of a particular time that I was going to start it. I started doing it when I wasn’t ready and ever since I started, it has just been growing,” she said.

Talk of a business plan, the young creative never had one. “They usually say that if you want to start a business, you should always have a business plan but at that time, I didn’t have a plan. I just decided to start putting my works out there on Instagram. I didn’t want to wait till I felt ready before starting because I knew if that was the case, I would never start,” she said.

On that note, she advised that people should not wait till they feel ready to take such bold, life-changing steps because they may never get that feeling.