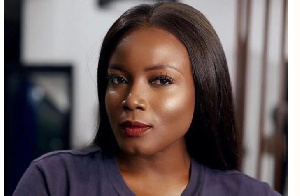 Irene Logan has opened up on why she moved to do gospel songs. The once sensational winner of Stars of the Future reality show believes it was her best choice.

Irene Lisbeth Grace Logan, popularly known by many as Irene Logan, had more to say on why she prefers gospel music than her former. In an interview with MzGee on the showbiz segment of the New Day morning show, the singer revealed the journey of her new beginning. According to her, she was raised with strong Christian principles by her parents, preachers of the gospel. Irene said she had a calling on her life and yet ignored it because she wanted to fit into the world.

But then I knew it, and I can’t explain. But during that course when I made a decision to go secular, it was because I didn’t think I could handle the responsibility of being gospel. This is because I was young, and I felt I won’t be able to do it because it was too boring. And I was trying to fit especially being an only child. I felt like if I went gospel, I would be on my own with no friends.”

“But during the course of my music career, there was A lot of back and forth, there was a lot of inconsistencies because I was really battling with myself and the calling. It took a lot of grace to finally come to the period of surrender. Even before I surrendered, I went through a lot of depression, addictions, and periods of secluding myself.

During those periods, I prayed A lot to God. I cried out a lot to God. It went from just leave me alone, God, to do what you want to do. Because I felt that every attack I was having in my music career was because I wasn’t walking in my calling.”

The singer further explained that during those turbulent times, she heard a gospel that encouraged her to start a new beginning in her life. And also, she was anointed with oil and officially declared a minister of the gospel.

Irene’s recent gospel song titled, ‘More’, has garnered many positive responses since its release. The singer has urged all fans to expect more in the coming years and support and stream the new song on all music selling platforms.

I only have 10 haters in the whole world – Shatta Wale

#NoBraDay aims to raise awareness of breast cancer during the month of October • Each year, October 13 is earmarked

Flashback: Shatta Wale proposes to Michy at the ‘Reign’ concert; kisses her passionately