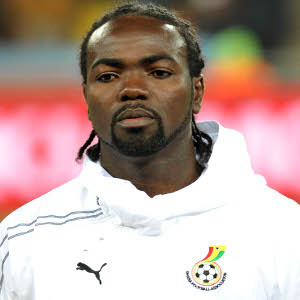 Ex-Ghana international Prince Tagoe wants the technical handlers of the Black Stars to revert to the old-fashioned 4-4-2 formation in subsequent matches.

His comment came on the back of the country’s jerky form under Charles Kwablan Akonnor who was handed the Black Stars coach in January 2020.

Akonnor is yet to repeat the same selection or formation since he took over the mantle from predecessor Kwesi Appiah and that has seemingly affected the performance of the outfit.

Ghana, under the stewardship of Akonor, has won four matches and drawn two with the others ending in defeats in all competitions.

The inconsistent information deployed on match days has not sat well with Prince Tagoe, who was part of Ghana’s squad at the World Cup in South Africa, 2010, and calls for a change.

“If they should take 4-4-2, it will help us because we need two strikers that will help us to get goals. If you are playing only one top, it is difficult. That is the main problem I can see with the team. We have to go back to our old 4-4-2 that we use to play and that will be much better,” the former Ghana Premier League goal king told Luv FM.

Ghana were dealt a huge blow in their hopes to qualify for the 2022 FIFA World Cup in Qatar after succumbing to a 1-0 defeat by South Africa. The Black Stars now sit in third following Ethiopia’s narrow 1-0 victory over Zimbabwe.

Ghana will be involved in a double-header against Zimbabwe next month on October 6 and 10 respectively.