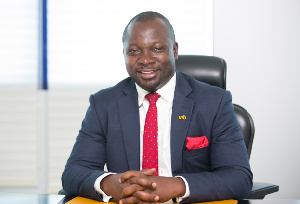 John Awuah, Chief Executive of the Ghana Association of Bankers

• This is according to John Awuah, CEO of the Ghana Bankers Association

Chief Executive of the Ghana Association of Bankers, John Awuah, has said calls proposing for the Bank of Ghana to place a cap on interest rates could result in unintended consequences.

This comes after the Director of Research at the Institute of Economic Affairs urged the central bank to impose a ceiling of five percentage points on the spread of banks to lower lending rates in the country.

According to IEA, the move could ‘force the hand’ of banks to follow the central bank’s monetary policy rate more closely and keep the lending rate within bounds.

But John Awuah speaking with Joy News said the call is counterproductive as the lending rates is often determined by market fundamentals.

“Any suggestions or any discussions of capping interest rates should be of a concern because it has a probability or propensity to be counterproductive and can really result in unintended consequences”.

“You can sight the example that we have seen in Africa where Kenya after three unsuccessful attempts at introducing interest rates cap, it finally introduced caps on interest rates in 2016, only to make a U-turn in 2019 going back to free-market-determining lending rates. You can’t run away from market fundamentals,” he explained.

He added that “as a country, we should all rally behind policy makers in their efforts towards a move to lower market interest regime. And banks will not have anything to do than to follow suit as we have done.”

He further said the discussion on lending rates and the disparity among banks and that of the central bank must focus on enhancing market policies.

“I think the discussion should be on what can we do more about what we’ve done in the last three or four years that has resulted in market rates coming down, policy rate trending downwards, T bills trending downwards, and all the other rates have followed suit. Lending rates is one of the rates and automatically that will also follow,” Awuah said.

Lending rates in the country, over the past five years have dropped from an average 29 percent to around 20.5 percent.