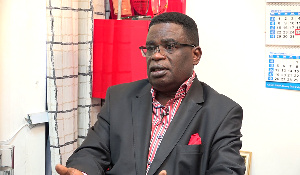 Africa has been opened up for free trading, since the beginning of 2021, with the introduction of the African Continental Free Trade Area, but experts believe much is left to be desired in terms of the readiness of countries to trade effectively within the single continental market.

Speaking on Eye on Port, a maritime law consultant and legal practitioner at Alliance Partners, Dr. Kofi Mbiah, opined that development ought to be made in infrastructure, the implementation of appropriate legal frameworks, and trading standards.

Dr, Mbiah who is also the immediate past CEO of the Ghana Shippers’ Authority, asserted that the transport infrastructure in African countries are weak.

He stated that since trade is inextricably tied to transport, failure to invest and develop hinterland transport systems will render developments in port infrastructure futile.

“The transport connectivity in most sub-Saharan ports is poor. Go to Apapa port in Lagos, for example, there is serious gridlock – about 5-10km of trucks lined up in a queue. You can’t build AfCFTA on that,” Dr. Mbiah cited.

Dr. Mbiah also bemoaned the cost of transportation within Africa as compared to Europe and Asia, which is making doing business in the continent costly.

“Today, in Europe, and most of the developed countries, the cost of transportation is about 5%. In Africa however, it is about 15-20% of the total cost of trade, and for landlocked countries, it goes up to 30%. There is no way you can have a very effective AfCFTA working with this kind of figures.”

He said it is fundamental to provide enough education on rules of origin as well as ensure strict enforcement within AfCFTA trading.

The industry guru also suggested that internal tax collection mechanisms should be strengthened in order to alleviate the revenue burdens on the ports, so as to facilitate the maritime trade.

“I have been advocating that that system where we emphasize on revenue collection from the Port through a certain tax regime, we must begin to move away from it, strengthen the internal tax collection mechanisms. For example, cigarettes, beer, etc. are the things that we will concentrate on as far as duties are concerned at the Port. You let businesses work and we take our taxes from businesses,” he averred.

Taking his turn on the subject, Executive Director of the Institute for African Maritime Development, Chief Obosu Mohammed, added his voice to the calls for improved intermodal connectivity among African countries.

Chief Obosu Mohammed said, “You have to agree with me when I say transportation is going to drive this AfCFTA, so we have to weigh the various modes and invest in the most efficient one.”

He broached the issue of the creation of national or regional shipping lines to cater to the trading volumes, in a cost-efficient way.

“There is a lack of investment in our maritime sectors. We need to develop policies that would enable the private sector to diversify into shipping lines, as well as ship repair centers at strategic areas,” Mr. Mohammed said.

The Executive Director of the Institute of African Maritime Development also called for increased political will in the matter of a common currency for Africa to aid trading.

The legal practitioner, Dr. Mbiah said there need to be regional strategic policies that converge with national policies.

He called for a structured competition within the regional blocks that would take advantage of certain areas of strength for trade.

“The countries within the block should discuss and ask where each has a competitive advantage in, and emphasize investment in those competitive areas so that eventually there’d be structured competition among the countries,” the maritime expert explained.

He said while Ghana’s digitalization agenda is relatively high, there needs to be increased focus on building digital systems across the entire continent.