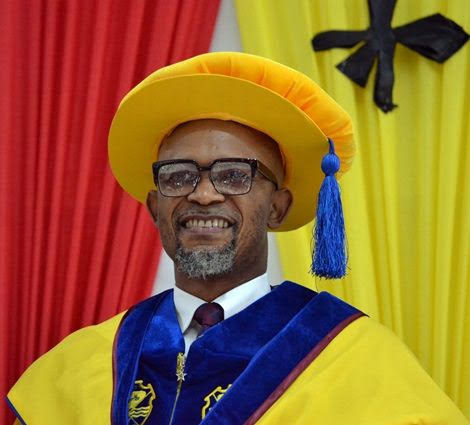 Having managed several affairs, first as a finance administrator and now Managing Director of Despite Media Group for the past 20years; he has taken time to research into local media communication to ensure the indigenes of Ghana can understand what goes on in the country by introducing typical Akan vernacular radio programmes and news contents.

And baring any unforeseen hitches, the governing council at George Fox University in Newberg, OR, USA, a renowned higher learning institution are expected in Ghana to confer the honours on the philanthropist (Fadda) at a future date.

Chief Executive Chancellor, WODIF, His Meritorious Eminence Rev. Dr Christian Kwetey Kweitsu has explained that Fadda Dickson’s tenacity to hold on to the typical Akan vernacular Radio programmes and news contents, in the face of criticisms stirred his outfit for his (Fadda) nomination for the recognition.

His decision to remain resolute has today ensured that PEACE FM, a member of DESPITE MEDIA GROUP is been considered as the leading and the best Radio station including its sister media houses in Ghana.

Fadda Dickson has through his exceptional trait has supported the creative arts industry in several ways. And this has been made possible through good relationships and camaraderie platform set to fraternize with numerous celebrities in Ghana, paving way for unemployed youth for job creation, business development, advancing prospects and wealth for the desiring and deserving persons.

He has a great passion for developing the young generation. This sense of initiatives on several youth projects has been enormous since many young people who face diverse unemployment problems get relief out of stress, and thus solving challenges confronting the youth.

As an ardent counsellor, he has allocated his evening periods to develop the acumen of the youth on talent discoveries, management and advancing career to create business and wealth.

He has created a good sense of cohesion with the politicians of all divide, diplomats and the business class among others throughout Ghana.

This relationship has helped him solve numerous problems or challenges facing the individual peers in politics, religion, ethnicity and business.

He is considered in Ghana as a celebrated icon of peace and father of transformation. He is a remarkable philanthropist who has been giving alms on the quiet to support the poor and needy in Ghana.

His major concern is to develop talents in the creative arts industry. His calibre goes beyond being just a philanthropist but a nationalist who loves peace to reign among humankind.

Indeed, the name Fadda Dickson Narh has become household in Ghana, winning him many accolades, Honours and awards both locally and internationally.

No wonder it has become an established fact that many young married couples name their children after him.

NPP declares the month of September for mass registration