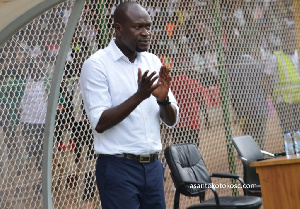 Coach CK Akonnor’s Black Stars have been at the receiving end after Ghana’s first two games in the World Cup qualifiers.

The Black Stars were uninspiring in their 1-0 win against Ethiopia at the Cape Coast Sports Stadium in their first Group G game.

However, the anger of Ghanaians shot up on Monday, September 6, 2021, when the Black Stars played an entire 90 minutes of football without registering a single shot on target in the 1-0 defeat to South Africa.

This has led to many questioning the project of coach Charles Akonnor as they fear that it can’t take Ghana to the World stage.

Others including many football pundits have called for the head of the Black Stars coach for failing to prove that he is the right man for the job after being in charge of ten games.

But is CK Akonnor’s Black Stars a failed project?

We table this for a discussion on today’s episode of the Friday Debate with Joel Eshun on GhanaWeb TV.

While TV Africa’s Dennis Osei Gyamfi and Michael Abayateye of Ghanaian Times state their position on this, add yours in the comment section: