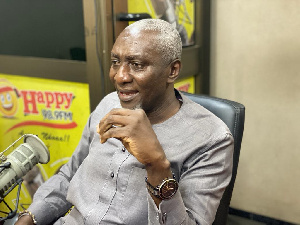 On his accord, Lieutenant Colonel Mamady Doumbouya is not interested in holding on to power and will sooner than later organize an election for the people of Guinea.

Speaking in an interview with Don Kwabena Prah on Happy98.9FM’s Epa Hoa Daben political show, Farouk Al-Wahab noted, “Doumbouya is not interested in holding on to power. Lieutenant Colonel Mamady Doumbouya will soon cede power to a democratically elected leader. He will quickly organize an election and give power back to the Guinean people. He will see Guinea enjoy a democratic dispensation once again because he is simply not interested in any Guinean Presidency.”

He noted that Lieutenant Colonel Mamady Doumbouya has dissolved the Guinea parliament and rendered the constitution void. “This means Alpha Conde cannot be reinstated into power even if he is released today. If anything, a new election will be conducted and power handed over to the winner of this free and fair election.”

Col Mamady Doumbouya is seen as the new man in charge of Guinea after he led a unit of elite soldiers to seize power on Sunday.

Announcing the military takeover, the 41-year-old former French legionary said the army had little choice because of the rampant corruption, disregard for human rights and economic mismanagement under President Alpha Condé.

“The president is with us, he’s in a safe place,” he told French media on Sunday.

Dressed in a red beret, sunglasses and army fatigues, he had announced earlier on Guinea’s state TV that “the Guinean personalization of political life is over. We will no longer entrust politics to one man, we will entrust it to the people”.

President Condé remains in detention while the UN, African Union and regional body ECOWAS all condemn the military junta that claims to have replaced him.

After meeting ministers from Mr Condé’s government on Monday, the colonel said a new “union” government would be formed within weeks and promised there would be no “witch-hunt” against former officials.

Agyapa agreement to go back to Parliament after recess – Ofori-Atta