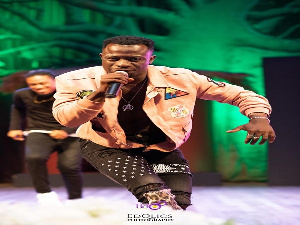 Upcoming Ghanaian artist and software developer, Shugalord, has revealed his passion for doing music and is now happy to find himself in the industry, making his long-time aspiration come to pass.

He said, he started his music career professionally early last year and released his first official album in February last year though he was doing underground music before.

Speaking in an interview with Royal Baby on Kingdom Drive show on Kingdom 107.7 FM in Accra on Thursday, September 9, 2021, the Kri8 Music signee said to be a successful artist you need a strong team to manage and direct you, and fortunately, he has that now making him not doubting his success in the entertainment space.

The talented artist continued that one thing that makes him special from others is how he can combine playing guitar with music at the same time.

When asked by the host what he needs to do as an upcoming artiste to get the limelight and into that big billboard, he replied “I need support from Ghanaians and the exposure to reach that level.”

I admire girls but I’m scared to propose – Black Sherif