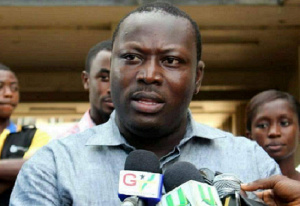 National Youth Organizer of the National Democratic Congress (NDC), George Opare Addo, also known in political circles as Pablo says anyone condemning former President Mahama’s ‘do or die’ statement does so out of sheer ignorance.

He reiterated that the ‘do or die’ statement is an idiomatic expression and only learned persons and those who understand the English language will get the import of former President Mahama’s statement.

“If you understand English, we have what we call idiomatic expressions, and ‘do or die’ is such an expression. One will get diverse meanings from the ‘do or die’ statement if you try to understand it and none of them calls for violence.

The first meaning that pops up after an intensive search is that you see yourself in a position of taking a big risk to prevent loss and that is what it means. So it simply means you don’t fail in what you seek to do. That is the first meaning of ‘do or die’,” he said on Happy HMS.

According to him, the former President has taken time to explain the do or die statement on several occasions but the ruling NPP is misinterpreting it to mean violence. “Mahama’s do or die statement means to avoid failure but because of the evil of the NPP, they are trying to skew the meaning of the statement towards violence.”

Pablo cited the NDC as a law-abiding party that is against violence and will not therein resort to it in the bid to win an election. “The NDC is not like Hawa Koomson who draws out a gun at a polling station.”

He reiterated in an interview with Raymond Nyamador on the Happy Morning Show, “It is ignorance on the part of anyone who describes former President Mahama’s statement as chaotic. It is rather a clarion call for vigilance and not mayhem.”

To him and the NDC, former President Mahama is a peace-loving statesman who has carried himself as such and will never compromise that. “His clarion call has no negative connotations and if anyone fails to understand him then it is their own problem.”

During his election 2020 ‘Thank You’ tour, John Mahama reiterated this suspicion on Tuesday, September 7, that; “we were clearly robbed, but we accepted the verdict for the sake of peace.”

This comment has received condemnation from a cross-section of Ghanaians who have called on the former President to retract his statement as it is unbecoming of a statesman, which he has refused.

He says his utterance regarding a ‘do or die’ affair at polling stations in 2024 is an idiomatic expression that has been misconstrued by the governing New Patriotic Party (NPP).