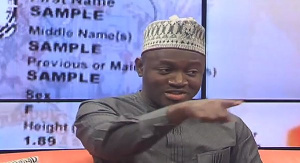 Alhassan Suhuyini is the NDC MP for Tamale North

• MP for Tamale North, Alhassan Suhuyini, doesn’t think that is the most dangerous kind of comment

The Member of Parliament for Tamale North, Alhassan Sayibu Suhuyini, has explained that beyond the much-talked-about ‘do or die’ comments by the former president, John Dramani Mahama, there is an even more dangerous statement Ghanaians should focus on.

He said that the popular reference to the statement that, ‘politicians have failed us’ should be one that should make people even more concerned, than merely concentrating on the definitions or not of that comment by the former president.

He made this known in a video sighted by GhanaWeb, on Twitter, when he appeared on the AM Show on the JoyNews channel.

John Dramani Mahama had said, during a radio interview, that the 2024 elections will be a do or die affair for the NDC, attracting him a lot of condemnations and commendations.

“The right thing must be done during the polls. In 2024, we will win the elections at the polling station and won’t wait for collation center results nor petition the Supreme Court,” he had stated.

Commenting on the statement by the former president, the National Democratic Congress MP explained that people who say politicians have failed them are a bigger threat to the future of the country than such comments.

“When you started this program, you promoted a very good project; a very good project of people supporting to build the classroom – very good work, but you said something that’s even more dangerous than all this discussion that we are having: the politicians may have failed you.

That is very common on the lips of many average Ghanaians who find ‘do or die’ as a threat. The politicians may have failed you but what replacement do you have for the replacement? The military?” he explained.

He added that such utterances should also not be overlooked since they put our democracy at risk.

“I’m just making the point that there’re certain things that we rather ignore that are more dangerous to the future of our democracy than this attempt to define do or die in a way that suits whatever agenda,” he said.