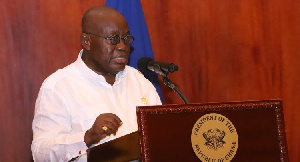 He said the President showed more interest in, equitable development than even matters relating to the Party, and had placed himself to secure the needs of the People.

The Minister was addressing chiefs of the Oti region during a working tour by President Nana Addo Dankwa Akufo Addo to the enclave.

Chiefs of the new Region had expressed regret over the failure to give the NPP a seat as promised during the creation of the Region.

The Minister said the NPP, built on the traditions of the pre-independent United Party, and created the new Regions, not for political gain.

“Akufo Addo exercises the executive courage needed in leadership. Politics is all about satisfying the deep aspirations of the people. In governance, if you have one with a good heart and good love.

“Yes we are politicians, but sometimes he scolds us when we do too much politics, and will say “no, the first and foremost is the equitable development of the country.

“He would say that whether or not we are voted for is not important, and that’s what we are seeing with the creation of the long-sought region.

“So it is true like you said that one thing the people of Oti could do to show appreciation for the creation of the region, was votes, but thank God we are lucky we have a President who does not consider that. So we will continue to do what we have to do,” he said.

Mr. Botwe added that contrary to the viewpoint of political opponents, the creation of the Regions jump-started development and distributed resources to uninhabited areas, and so his government would pursue its total development.

“I don’t speak for the President, but it’s clear he is not disappointed, and so the development programmes he had tasked us with based on the blueprint he gave us from January 2019 is what we are following to the letter. And by the grace of God we will continue working to glorify God so that your fruit will be blessed for all to benefit,” the Minister stated.

President Akufo Addo inspected the ongoing construction of administrative offices for the new region, spread across the various districts.

He first opened a yam and cassava processing factory under the One District One Factory initiative at Adonkwanta in the Krachi East Municipality, the first in the Region.

Works on the Eastern Corridor road were also assessed, in addition to an integrated waste treatment plant for the Region.

President Akufo-Addo told chiefs in the Region that negotiations towards the construction of a bridge over the Oti River at Dambai were progressing fruitfully, and that the realization of the superstructure would be his legacy.

He added that a Dambai Water Project was part to cater for the long-sought potable water in the river enclave, in addition to efforts to solve the problem of erratic power supply.