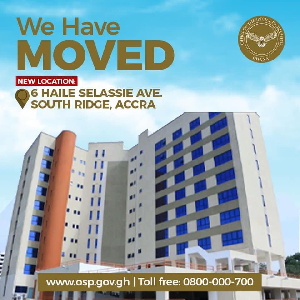 • Located at South Ridge in Accra, the new office is a 10-storey complex initially intended for GETFund

The Office of the Special Prosecutor has been re-located to South Ridge in Accra, on the orders of President Nana Addo Dankwa Akufo-Addo.

A report by Citi News disclosed that the 10-storey complex, near the Parliament House, was intended to be the Head Office of GETFund.

The old office space, which was a three bedroom building at Labone in Accra, was described as inadequate by the former Special Prosecutor, Martin Amidu.

In 2020, the former Special Prosecutor received the keys to this new office but in a letter dated August 3, 2020, Martin Amidu also expressed disappointment to the Chief of Staff, Frema Akosua Osei-Opare, for her failure to inspect the GETfund property before handing over the keys.

According to him, it was not up to standard, adding that it took his interventions to have “serious remedial works” on the building.

He thus returned the keys to the Chief of Staff.

Martin Amidu’s successor, Kissi Agyabeng, will occupy the new office with the staff of the Office of the Special Prosecutor.

Parliament passed the law to establish the Office of the Special Prosecutor in November 2017.

The office is mandated to investigate and prosecute cases of alleged corruption and corruption-related offences under the Public Procurement Act, 2003 (Act 663).

E-block: Retract, apologise to Aflao chief over ‘build it yourself’ comment – Ablakwa to Akufo-Addo