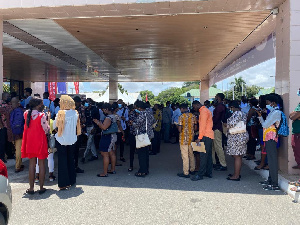 • Over 1000 youths gathered at the AICC for job opportunities

The Youth Employment Agency boss, Justin Kodua Frimpong, has expressed shock at the overwhelming numbers of job seekers who massed up at the Accra International Conference Center (AICC) on Thursday, September 9.

Over 1000 young men and women thronged the AICC to try out their chances in the job fair.

Following that, Justin Kodua Frimpong admitted that there is even more work for them to do to ensure that the country’s gaping unemployment level is bridged, reports Citi Business.

He explained how sad he was at seeing such numbers at the fair and is now, more than ever, poised to engage and partner with other stakeholders to remedy this situation.

“At a point, I felt sad. To be honest, looking at the number of youth who were there and the level of desperation that set in, then I really realized that, as an agency and as a country, we need to do more, although it is understandable that we are a developing country and year after year, a number of the youth want to join the labour market, which is why we are having this challenge.

“But my team and I realized that it is good that we have started this job fair to partly deal with the issue of unemployment in this country. We will go back to the office to see how we can also scale up,” he explained.

The YEA boss explained the outcome however makes them proud that they took such a decision.

“I must say that what transpired has really vindicated the decision of the management of the YEA to move away from models like community police and nursing to more of job facilitation and liaising. So far, we are happy and satisfied with the number of companies that came and gave employment opportunities for the youth,” he added.

Many of the youth who gathered at the AICC were captured in long queues waiting their turns to enter the main building, from where the potential jobs were on display, and for them to participate in interviews.

Guinea, Ghana and Mali were one country – Kwesi Pratt