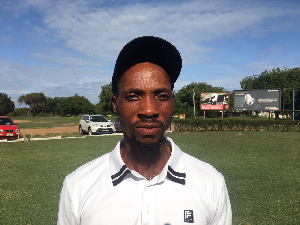 Francis Torgah has won the the second and final Qualifying tournament for this year’s Gold Fields PGA championship at the Celebrity Golf course.

The young man from Center of the World Golf Club (COTWGC), formerly known as Tema Country Golf Club rose to the occasion after leading the first day with incredible score of -6 to finish with a total score of -7 over the three days scoring 65 in Round one, 69 for day two and 72 at the final day beating his senior brother Vicent Torgah by just a stoke.

Vincent who placed second position did not start well in the first round with a score of 70 compared to Francis who returned 65 in the same round but Vincent pulled his best in remaining two rounds with a score of 67 and 70 in round two and three respectively getting a total gross score of 207 over three days.

Francis Torgah is looking forward to have a good tournament in Damang later this year.

“It’s a great score for me and for me it’s all about hard work and dedication. I don’t sleep I always practice to better my game.

“I Want to thank God for making the three days available for us and to Gold Fields for always sponsoring and also organizing the Damang Championship every year for PGA of Ghana. Last year I did well in Damang but my best was not enough to win the championship but this year I’m going with my chest open to get a good tournament possibly to win.

“I’m hoping to play few tournaments before the Damang Championship to raise my play and put me in that form of my life I have been practicing for.”

Achimota’s Vincent Coffie was in his element to grabbed the third position with total standard scratch score (SSS) of 214 with 75, 68 and 71 in round one, two and three respectively.

The Zimbabwean import Biggie Chibvri, was joint fourth with Emos Koblah with the score of 216 each whereas one stroke separated them from sixth placed E.K Osei who scored 217.

The regular winner in the seniors category Victor Brave Mensah, was this time beaten by Robert K. Degbe with 147 in two days chalking 72 in round one and 77 in round two putting Brave behind with seven (7) shots.

155 gross score was enough to put newly elected treasurer for the Association Dawuda Mahama third as James Larry and Effah Poku came fourth and fifth with 160 and 169 respectively to complete the top five in that division.

24 regular golfers from these qualifiers with 15 senior golfers and additional 15 foreign golfers making a total of 54 will compete at this year’s Gold Fields PGA Championship in Damang which will come off later this year in the Western Region of Ghana.

Job creation is the responsibility of government – Dr. Kofi Amoah

FLASHBACK: I will frustrate Mahama till he loses all of his teeth and develops waist pains – Chairman Wontumi