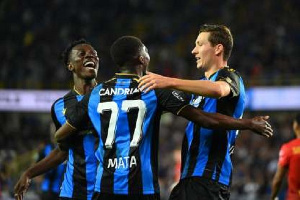 The 21-year-old joined the Belgium champions in the summer transfer window from Leicester City and has hit the ground running after proving an assist in the 3-0 win.

Philippe Clement was happy with the reaction of the team after the 6-1 defeat to Gent before the international break.

“I expected this reaction after the match against Ghent. The players put pressure on them from the first minute. The ball tempo was high and we created chances. We have given very little away on the other side. This should be the foundation for the coming weeks and months. We have to keep repeating this and after the 1-0 keep going for the next goals,” he said.

Newcomers Kamal Sowah and Jack Hendry both featured for the first time and the Ghanaian showed why Brugge dolled out millions of Euros to purchase him.

“They are two guys who fit in with our philosophy. Jack trained for the first time yesterday but is in excellent condition. Kamal did train with us during the international match. It is a matter of finding automatisms,” said Clement.

Kamal Sowah will be expected to make his UEFA Champions League debut when Brugge faces PSG in midweek.

“They are two completely different games, but that doesn’t mean we won’t work very hard to get the most out of that game,” added the manager.

CAF Champions League: Hearts of Oak arrive in Morocco ahead of 2nd leg game against WAC