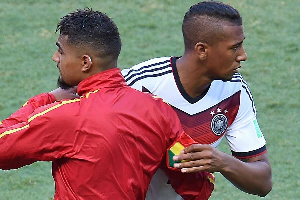 Kevin Prince Boateng has dissociated with the actions of Jerome

Ghanaian forward Kevin Prince-Boateng has distanced himself from the actions of bother, Jerome, who was found guilty of abusing his ex-partner.

The Olympique Lyonnais player was fined 1.8 million Euros by a German court despite pleading not guilty.

However, his senior brother, who separated with his wife Melissa Satta earlier this year, says he does not want to associate with his brother.

“I have distanced myself from Jerome for a long time now,” he told Spox.

“I appreciate and respect German law. I abhor violence against women. I do not identify with my brother’s actions and therefore I have nothing more to do with it. do with him,” he added.

Boateng returned to Germany in the summer to rejoin boyhood club Hertha Berlin.

Guinea, Ghana and Mali were one country – Kwesi Pratt