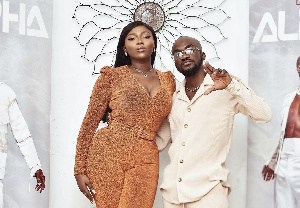 Multi-talented Ghanaian musician, Mr. Drew has quashed claims he had sexual affair with fellow musician, Sefa during their travel to the UK for the “Ghana Party in the Park” concert.

Speaking in an interview with Sammy Kay on the Go online show, Mr. Drew explained that he had nothing sexual with Sefa as purported on social media.

Mr Drew who released his much-awaited studio Album titled “Alpha” on September 10th added, though nothing happened between them, they are two adults therefore if they want to sleep in the same room, date or even have something sexual going on between them.

He said, “It’s no ones business”, hence the need for people to stop spreading false information just because Sefa was seen in his room recording a video, during their travel to the United Kingdom.