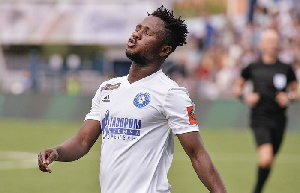 Black Stars forward, Joel Fameyeh continued with his impressive run for FC Orenburg as he scored in their 4-0 win over KamAZ in the Russian National League.

The former Asokwa Deportivo attacker scored the third goal of the game in the 52 minutes in the second half.

Fameyeh who returned from international duty with the Black Stars after the 2022 World Cup qualifiers scored to secure the win for his side.

Nikolay Prudnikov and Arshak Korean scored Orenburg’s two goals in the first half before the Black Stars striker scored the third goal in the second half.

The Ghana international has scored five goals and registered one assist in eight matches in the ongoing campaign for Orenburg.