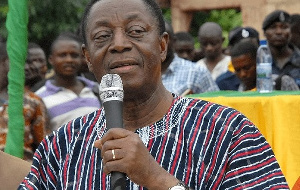 Former Finance Minister and Governor of the Bank of Ghana, Dr Kwabena Duffuor

Former Finance Minister and Governor of the Bank of Ghana, Dr Kwabena Duffuor has declared that Ghana can be fixed only if Ghanaians put God first.

He added that he is proud that Ghana embraces all faiths and values a life of Godly devotion.

“As a devout Christian, I feel a great kinship with the Jewish people and as a Ghanaian, I am proud that our great nation embraces all faiths and puts a premium on a life of Godly devotion. Only by putting God first can we fix this country and lead purposeful lives of devotion and service,” he said on Facebook after a visit to the Chief Rabbi of Ghana, Noach Majesky.

In recent times, many have called on the political class to fix the country. A movement, spearheading the call for the country to fix, #FixTheCountry has staged a demonstration to drum home their demands.

The movement has called for the replacement of the 1992 Constitution, stressing that it is at the heart of Ghana’s economic and political problems.

The ruling government has however said that it is doing its best to fix the country and needs the commitment of all and sundry.

‘Let the welfare of residents be your priority’ – Tema residents