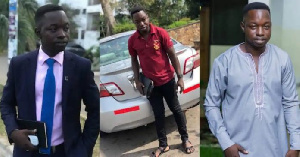 Members of the University of Ghana’s premier all-male hall, Commonwealth and by extension the entire student body have been thrown into a state of mourning following the loss of a final year colleague.

The deceased, identified as Daniel Anane Wadie per an Adomonline report, died at the university’s hospital where he was being treated for an undisclosed ailment on Wednesday, September 8, 2021.

According to the Adomonline report, his status read,

“When my body is gone, remember my heart.”

He was said to be a member of the University of Ghana Parliament House.

Reacting to his demise on social media, some of Daniel Wadie’s colleagues mourned him with the #RIPVandalDanny and #LegonIsRed.

A candlelight vigil was also held in his honour on Friday, September 10, on the school campus.