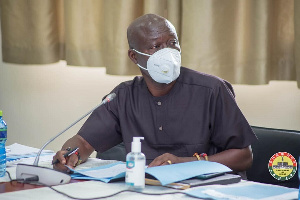 The 1-0 defeat against South Africa in Johannesburg has led to calls for the sacking of Akonnor who has been in charge of the senior national team since January 2020.

Akonnor’s side were appalling, and according to Vanderpuye who served as Sports Minister between 2015 and 2017, they were lucky not to concede many goals in Johannesburg.

“We saw the team play against Ethiopia and after the match, we were afraid of what was going to happen in South Africa,” he said on Starr FM.

“We were lucky we lost by one goal. Judging by their performance, the South Africans were not good, else they would have embarrassed us.

“I hear Akonnor isn’t the only problem. People are pushing for their players to be in the team.

“In the middle of a WorldCup Qualifying series isn’t the ideal time to change a coach.

“But I’m radical. If I was the GFA Boss, I’d sack the entire technical team, not Akonnor alone,” he added.

The GFA are expected to meet on Friday to discuss the trending issue.

‘You neglected us so don’t count on us again; we’re tired of you’ – Ash. NDC youth to Mahama