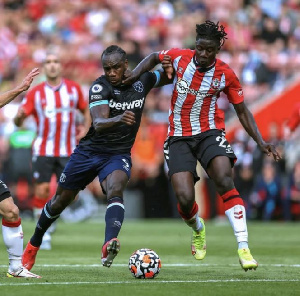 Ghanaian defender, Mohammed Salisu exhibited another impressive performance for Southampton in their game against West Ham United on Saturday in the Premier League.

The former Real Valladolid defender continues to cement his place in the starting lineup with his performances for The Saints.

Salisu who arrived from Spain and struggled to get game time last season in the Premier League has featured in all the games for Southampton in the ongoing campaign.

He bagged another 90 minutes with a solid performance against David Moyes’s side.

“Great effort from the team today, disappointed we couldn’t get the results we wanted!!. Let’s keep on working!!”, Salisu said in a post.

Emmanuel Gyasi reacts to ‘Ronaldo-inspired’ goal for Spezia against Juventus