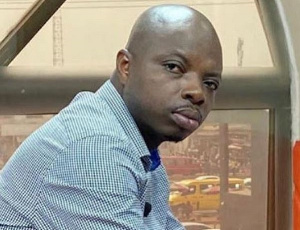 Maxwell Mahama, a member of the communication team of the ruling New Patriotic Party (NPP) in Sunyani East has lambasted Abronye DC for some “irresponsible comments made against the daughter of John Mahama, Farida.

“It’s a very bad and divisive communication,” he said.

Bono Regional Chairman of the New Patriotic Party, Kwame Baffoe, popularly known as ‘Abronye DC’ reacting to former President John Mahama’s “do or die” comment said if the former President’s intention is for people to die during election 2024, then his daughter will be first.

“If that is the case, the first person to die will be Farida Mahama because his father is power-drunk and so he will be happy to see everyone dead just for him to be President

“I want to tell them that we’re really prepared for election 2024; if they want fire, they will have it and if they want peace there will be peace. If he wants fire, he will be the first person including his daughter, Farida; she will be a polling agent so when the fire starts, she can’t escape” he indicated in an interview on Neat FM’s Ghana Montie programme.

However, speaking in reaction to this in a similar interview on Neat FM’s ‘Me Man Nti’ programme, Maxwell Mahama said Abronye DC should have known better.

Meanwhile, Maxwell Mahama has urged Mahama to stop making comments that will generate fear in the country saying “you’re a statesman so don’t paint the picture that you are after a do or die power. say things that will unite us and not divide us.”

Youth urged to be vigilant in their communities

Roads in my constituency are causing miscarriages – Madina MP