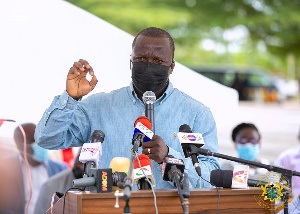 Kwesi Pratt Jnr, the Managing Editor of The Insight newspaper, has asked that the President of the Republic, H.E Nana Addo Dankwa Akufo-Addo throws his weight solidly behind the proposals made by the Minister for Lands and Natural Resources, Hon. Samuel Abu Jinapor to have a ban placed on the acquisition of public lands for private purposes.

Speaking during a table discussion on Pan African TV’s “Good Morning Africa” on Friday 10th September, 2021, He said, “The Minister has not banned the acquisition of land for private purposes, he has only suggested that it should be done. And I have said, if he is going to succeed, it’s going to be absolutely necessary for the President to put his full weight behind this young Minister”

He termed the proposal by the Lands Minister as very bold and a serious issue that must be taken up as he believes that this initiative when practicalised will make the majority of Ghanaians happy.

Mr. Pratt criminalized the act of government officials acquiring lands cheaply and selling them beyond 1000%. He said this act must be brought to an end and not be further encouraged.

He made reference to government bungalows built around the Ridge Hospital. He said these were built purposely for doctors however today, it has all been bought by politicians and this poses a threat on the lives of emergency patients who need the urgent attention of doctors who now live as far as Kasoa and Ofankor because their abode which is close the hospital has been taken away.

The Editor declared that he is particularly happy that Hon. Jinapor has seen this as a problem and is flagging it and is therefore in full support of what the Minister wants to do.

Kwesi Pratt Jnr concluded by reiterating that without the support of the President, Hon. Samuel A. Jinapor will not be able to achieve his aim. He also lauded the Minister for a good job done so far, on the efforts to bring an end to illegal Small-Scale Mining ( galamsey) and the Rosewood menace.