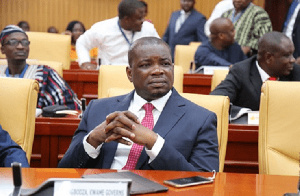 Ranking Member on the roads and transport committee of parliament, Kwame Governs Agbodza

• However during his vetting, the roads minister hinted at increasing road toll when reappointed

The minority in parliament has stated that it will combat all ventures by the government to increase road tolls in the country.

Of recent, Honourable Kwasi Amoako-Attah, the roads minister for Ghana has suggested that road tolls be increased for improved roads and the promotion of the construction of new roads.

However, unsatisfied by the Roads Minister’s suggestion, the Ranking Member on the Roads and Transport Committee of Parliament, Kwame Governs Agbodza comments that the reasons for toll increment are unjustified.

“The Roads Minister hasn’t justified how he uses the GHS1.8billion Ghanaians contribute to the Road Fund currently. The problem the roads minister has is not because he doesn’t have enough money. It’s simply because the government of President Akufo-Addo has decided that, when Ghanaians contribute to the Road Fund including road toll, they will use only half for road-related work,” said Agbodza.

“So, the Roads Minister does not have any justification to ask for more. It is not fair to us as Ghanaians to pay for more. We in the Minority cannot support the government to increase road toll and exacerbate the pain of the ordinary Ghanaian,” he added.

It can also be recalled that during the vetting of the roads minister in Parliament, Kwasi Amoako-Atta stated that one of the policies he will roll out is to without delay, ensure that road tolls go up marginally should he be maintained by the President.

In spite of the many investments by governments in the road sector, it has not been adequate to show a compelling advancement in the country’s overall network of roads.