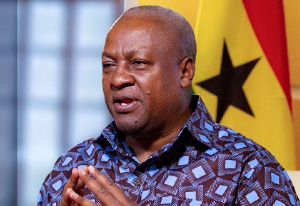 A faction within the youth base of the main opposition National Democratic Congress (NDC) in the Ashanti Region, has passed a vote of no confidence in former President John Mahama and called for a new flag bearer for the party ahead of the 2024 general election. The group insists a new face is needed to rally the party’s support base into a “formidable” force for the next election.

The disgruntled youth, in a press statement, also accused Mr. Mahama of neglecting the Ashanti Region when he won power in 2012.

“How come only Tamale metropolis had three cabinet ministers yet the biggest region in the country, Ashanti was neglected?” the group asked.

“In fact, at the start of the administration, there was only one minister from Ashanti Region – the Minister of Environment Science and Technology, Professor Oteng Agyei – who was sacked bitterly and mysteriously just some few months into the administration,” the statement signed by the convenor, Mr. Kweku Asare Mensah said.

“How come John Mahama appointed five cabinet ministers from Central Region in addition to having the vice-president from same region?”

“How come there were also five cabinet ministers from Eastern Region in addition to the chief of staff?”

“John Mahama, who could neglect the Ashanti Region this much now pretends to be the ‘lover boy’ just to deceive us and neglect the region again”.

“Our message to him is simple: He shouldn’t count on us because he neglected us when he had the power”.

“NDC needs new leadership direction, a leader who is in to build a more formidable party not one who is only in for his personal good,” the group said.

“John Mahama is scheduled to hit the region on 13 September with his Thank You tour, but the youth of the party is sending a signal that they are fed up with him”, the group added.

MMDCE nominations: Akufo-Addo has turned the process on its head – NDC MP

Do or Die: Members of NDC are not cowards, we support Mahama 100 percent – Thomas Yankey