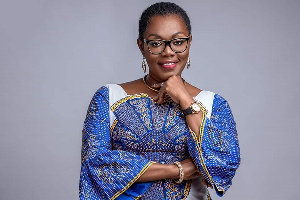 Mrs Ursula Owusu-Ekuful, Minister of Communication and Digitization has appealed to young girls to embrace information, communication and technology (ICT)studies in order to become future programmers who would help shape the country.

Mrs Owusu- Ekuful gave the advice as part of her tour of some ICT centres in the Akontombra and Suaman Districts in the Western North Region.

The girls in ICT according to the Minister, was a programme instituted by the Ministry of Communication and Digitization to help dispel the negative perception that Science and Technology Education was not meant for girls and also to ensure that ICT became part of girls especially those in rural areas.

She said teachers have been well trained in the programme and that girl child education coordinators would be incorporated at the district levels, adding that special packages would be given to them to serve as motivation to become role models for girls in ICT Programme.

She mentioned that the Ministry would collaborate with the Member of Parliament of the area and the District Assembly to set up more community ICT centres to improve ICT education among girls at all levels.

The Ablekuma West MP announced that women in leadership positions would visit Waiwso in the Western North Regional capital on September 14, 2021, for a mentorship programme to educate and motivate young girls to aspire to higher heights and have confidence in themselves.

She, however, expressed worry about the fact that some parents take away gadgets given to these young girls after the exercise and appealed to parents to allow the girls to use the appliances since the constant practice was key to the success of the girls in the ICT programme.

The Minister said 900 girls from the nine districts in the Western North Region and another 100 from Western Region were involved in the programme.

Mr Alex Djonobuah Tetteh, Member of Parliament for Akontombra Constituency, commended President Akufo-Addo and the Ministry of Communication, for the initiative since he believed would go a long way to help improve upon ICT in the Constituency in particular and the Region as a whole.

Some of the girls in an interview with the Ghana News Agency, lauded the idea since according to them, it would help them to become future leaders in ICT.

CAF Champions League: WAC to arrive in Ghana on Friday ahead of Hearts of Oak clash