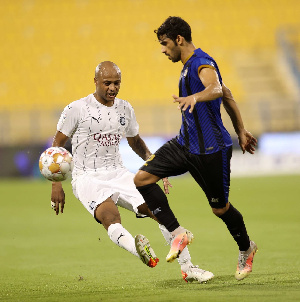 Black Stars skipper Andre Ayew is optimistic of brighter days ahead after making his debut for Al Sadd in a 2-0 win over Al Sailiya in a Qatari top-tier assignment on Sunday.

The champions scored their first goal in the 23rd minute when Boualem Khoukhi finished a Baghdad Bounedjah pass. 10 minutes later, the latter completed his brace of assists, this time around setting up Rodrigo Tabata.

The Ghanaian, who played the entire game, saw his effort, in the 18th minute, pushed over the bar by Magdi Siddiq in the visitors’ goal. Despite not finding the back of the net, he was sharp throughout the game.

The former Swansea forward has now taken to his social media account to express his feelings after making his debut for the Xavi Hernandez-led charges with a win.

“First game and three points; happy to play my first official game for the club. Insha-Allah, there will be more to come from us,” Ayew reacted on social media.

It was the first game in the 2020/21 Qatari top-flight division campaign, and an excellent way for the reigning champions to start the season.

The West African completed his move to Al Sadd on July 23. The 31-year-old joined the King of Hearts as a free agent after leaving EFLChampionship club Swansea City at the end of last season.

Having signed a two-year contract with an option to extend for another one year, the forward was handed the No.24 jersey.

“As soon as I was informed that Al-Sadd was interested, I thought straight away that it was a very good idea for me. For me, it’s the best club in the Gulf; I watched their style of play and it’s the best club here,” Ayew had stated when he signed for his new team.

“It’s also a club with which I have a personal history due to my father. I followed the club when I was young because my father always followed the club’s results. It wasn’t a surprise for me, I was very happy and proud, but I had to take some time to make the decision, because I had a few offers from the Gulf and from Europe, so I had to take time to make the right decision.

The attacker hopes to be involved when his team makes a trip to Qatar SC in their next assignment.