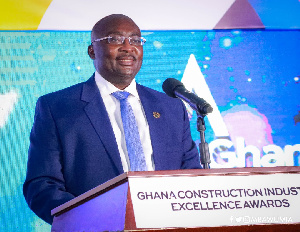 Vice President Mahamudu Bawumia has delivered a subtle response to former President John Mahama over his ‘do or die’ comment.

The comment by the 2020 flagbearer of the NDC sparked national conversations with some Ghanaians accusing him of inciting his supporters to violence.

Mr. Mahama noted at a radio interview in Techiman in the Bono region that the NDC will insist on the right thing being done at polling centers in the 2024 elections noting it will be a ‘do or die’ affair in polling stations.

In an apparent reaction to the comment, the Vice President who was addressing the Ghana construction industry excellence awards ceremony in Accra said: “Finally, let me congratulate the award winners for tonight and I wish those who could not make it a better luck in 2022. You know when you go for these competitions and awards, it is not “do or die”.

In a further swipe, the Vice President said “But serious, if you go to court to challenge an election results and you have no pink sheets, then your case will die”.

According to the 2020 flagbearer of the opposition party, the electoral commission deliberately took measures to ensure that President Akufo-Addo and the NPP won the 2020 elections.

He also reiterated his claim that the election was stolen from his party.

“In the 2020 elections, the pink sheets forms were such that you could not compare the biometric figure with the ballot papers in the box. It couldn’t have been a mistake. We have printed ballot papers so many times in this country and everyone could compare ballot papers with what’s in the box but with this one, it was not so. On election day you saw people arrested with ballot papers.

“In my view for everyone ballot we arrested, about a hundred, we didn’t arrest. So my view is that there was a lot of stuffing of ballot papers. The election was stolen but the Supreme Court says it was clean so we have accepted it for the peace of this nation and we recognize that President Akufo-Addo is our leader”.

The Lowdown: There is some hypocrisy on the side of ECOWAS – Irbard Ibrahim