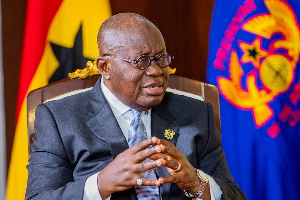 President Nana Addo Dankwa Akufo-Addo five years ago said John Dramani Mahama couldn’t develop the nation even if he’s given more years to be in office.

He further accused the former president of mismanaging the economy and bringing hardship onto Ghanaians.

Akufo-Addo said, “If you give Mahama’s government 100 years they can’t do the job.”

He said this during his four-day campaign tour of the Greater Accra region in 2016.

Read the full story originally published on September 22, 2016 by ClassFM.

Speaking in Sege in the Greater Accra region, Nana Addo noted the Mahama-led administration has mismanaged the economy and must not be retained.

The duo are facing off for the second time after the 2012 elections which was resolved in the Supreme Court.

“If you give Mahama’s government 100 years they can’t do the job,” the former foreign affairs minister told the people of Sege and Ningo during his tour.

Akufo-Addo promised to set up a salt and vegetable factory in Sege “as part of measures to create jobs.”

He also pledged to build a sea defense wall to “protect lives and properties” if he comes to power.

Akufo-Addo is on a four-day campaign tour of the Greater Accra region.

Covid: New WHO group may be last chance to find virus origins