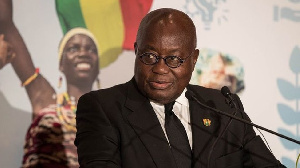 The Chiefs of Gbi Traditional Area of the Hohoe Municipality in the Volta region have noted that the Municipality is progressing under the leadership of President Nana Addo Dankwa Akufo-Addo.

Senior Divisional Chief of the Gbi Traditional Council, Chief of Gbi Wegbe, Togbe Keh XII speaking on the behalf of the Chiefs and people of Gbi and Alavanyo areas praised the President, adding that Hohoe Municipality has seen a major transformation.

“Mr. President, we want to place on record that Hohoe has witnessed and continues to see unprecedented development and rapid physical transformation over the last four years.”

“Let the world out there know this, on this very day that, it took Nana Addo Dankwa Akufo-Addo and his New Patriotic Party (NPP) government to fix Hohoe and indeed Nana is still fixing Hohoe,” he added.

Togbe then mentioned that the Political narrative in the Hohoe constituency has changed.

He augmented his statement by adding that, “Hohoe constituency is now and forever blue(NPP) and no more green(NDC)”

The Chief mentioned this during a courtesy call the President made on the Chiefs of Gbi and Alavanyo Traditional Areas on Friday, September 10, 2021, during a one-day Presidential tour in the Volta region.

On the side of the President, he thanked the people of Volta especially the constituents in Hohoe for their votes and also producing a Member of Parliament (MP) Peter Amewu in the 2020 general election.

He made emphasis that, he is still working towards capturing the entire Volta region and Hohoe will serve as the bridge to achieving his dream.