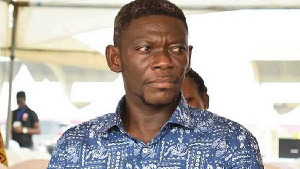 Popular Ghanaian Kumawood actor, Alex Kofi Adu, popularly known as Agya Koo, has sent a message to the media houses and people tarnishing his image with what he claims is fake news.

He told Doctar Cann during an interview on Happy FM’s Showbiz Xtra that he is tired of being the forgiving angel whose image is always tarnished but never takes action against the people at play just because he is asked to forgive and forget.

According to him, he never mentioned in an interview that Ghanaians should take their children out of the country due to the country’s poor living conditions and he believes it is high time he stood firm and allowed the law to deal with people who try to tarnish his image.

“There are laws in the country so I will take this case to court and in a few days, you will all hear about it,” he bitterly said.

The actor however prompted the people in question to make ready and bring forward every piece of evidence that they have, be it photos, videos, or audios that prove he really said what they claim he said in an interview.

“I want the presenter or station they claimed I had that interview in which I said that to come out. I want to know where I said it and at what time I said it,” the actor further added.

Why are you judging Zionfelix? – Delay to critics

My necklace alone can buy an uber – Fameye replies troll