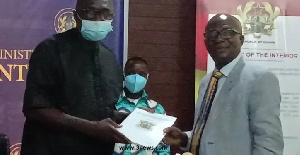 The committtee have submitted their findings to Ambrose Dery, the Defense Minister

International security analyst Adam Bonaa has urged the government to publish the Koomson-led Ejura Committee’s report on the killing of protesters in after the death of social activist Macho Kaaka.

According to him, it is public knowledge that the committee’s work has concluded and the report submitted to government.

He said because the committee’s work was televised countrywide, individuals like himself had high hopes for the outcome of the committee’s work and thus advocated that compensations be paid to the families of those killed and injured as a result of the military engagement with the people of Ejura.

Mr Bonaa said he had the information that the Ejura Committee report should have been published on Monday, September 13 but realized that the President is the Guest of Honor at the Ghana Bar Association (GBA) Conference in the Upper East Region, hence, he is hopeful the report will be published latest by Thursday or Friday.

He said he is anticipating seeing the report published in order to ascertain who did what and the adequate compensation to be paid for the victims of the military high-handedness and also the families of those who lost their lives on that day in Ejura.

When asked what the meeting of a government delegation to meet the family of the victims in Ejura to announce to them that the report on the killings is done and submitted to government and if it will assuage their pain, Mr Bonaa said: “Well, I think so. I mean to assuage their pains, it was good. Some of us advocated that post the committee, the government will let the authorities and the powers that be to go there because at the end of the day, whether they receive you well or they didn’t receive you well, as far as I am concerned they have to engage the families”.

Mr Bonaa also indicated that individuals like him have advocated to the police that they have to provide psychological support for the victims and their families because in his opinion, what shouldn’t have happened happened. So, in order to assuage their pain, the police need to constantly engage them and when the report comes out, detailing what took place, they will find it in their hearts to forgive the police and military.

He thus admonished the public to wait and see what the report is going to contain, what compensations will be for the victims and their families, who will be found culpable and the punishments that will be meted out to them.

Mr Bonaa made all these known in an interview with TV3’s Komla Adom on Midday Live on Monday, September 13.

He was commenting on the back of the Ejura committee report that has been submitted to the President and is reported to be made public Monday, September 13 but to no avail while the family of the slain social activist Ibrahim Anyass Mohammed, commonly known as Macho Kaaka, who have petitioned the National Chief Imam Sheikh Osman Nuhu Sharabutu to press for justice for Kaaka and the people of Ejura.

“I would say better late than never, I would urge government to expedite the publication of the findings, they should publish it quickly. I am hoping to see who did what and the adequate compensation for the victims,” Mr Bonaa urged.

Earlier, 2020 flagbearer of the National Democratic Congress (NDC) John Mahama was in Ejura, calling for a publication of the entire report and not leaving out some of the recommendations as done with the Ayawaso West Wuogon by-election report.

Owusu Bempah remand: This would not happen under Mahama – Nigel