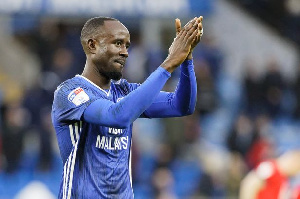 Ghana attacker Albert Adomah has been lauded by many Queens Park Rangers fans following his impressive outings against Reading.

Adomah came on from the bench as the Rs managed to maintain their unbeaten start to the season with a 3-3 draw at Reading.

QPR travelled to Reading, aiming to secure another important three points and maintain their promising start to the season.

However, the Rs endured a difficult afternoon against the Royals, who managed to come back from 1-0 down early to take a 3-1 win thanks to John Swift’s hat-trick.

It looked like QPR were set to suffer their first league defeat of the season in the Championship before Mark Warburton turned to his bench and brought on Adomah in the 72nd minute.

The experienced attacker proved to be an excellent player to have brought on in QPR’s circumstances at Reading.

Adomah managed to produce three accurate crosses and one key pass as he proved a real impact sub and helped the Rs pile pressure on their hosts.

That pressure ultimately paid off for QPR, and they managed to get back into the game thanks to a debut effort from Andre Gray and then equalised through Stefan Johansen.

Many QPR fans were swift to hail Adomah for his impact from the bench, and there was even one fan who suggested that he should now be being included in their starting line-up.

Albert adomah completely changed it for us. What a result so happy to stay unbeaten

Albert Adomah changed the game AGAIN. What a guy, fantastic impact. Amazing for Gray to grab a debut goal. Great performance from Johansen too, my MOTM. Could’ve won but at least we didn’t lose #COYRs @QPR

Albert Adomah is the best impact sub in world football