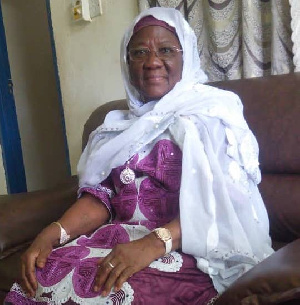 The Minister of Trade and Industry, Alan Kojo Kyerematen has commiserated with Vice President Mahamudu Bawumia following the death of his mother.

The death of Hajia Maraima Bawumia was announced by the Vice President in a statement earlier this morning.

Reacting to the news of her death, Mr Kojo Kyerematen who together with the Vice President are tipped to be the leading contenders for the New Patriotic Party’s flagbearership in 2024, said he was shocked and saddened to hear the news.

“I have learnt with shock and sadness the passing into eternity of Hajia Mariama Bawumia, mother of H.E Alhaji Dr Mahamudu Bawumia, Vice President the Republic,” he stated in a Facebook post.

Mr Kyerematen in the post extended his sympathies to the Vice President, his wife and their family for their loss.

“My wife, Patricia and l extend our deep sympathies to Dr Bawumia, his wife Samira, and the rest of the family.
May Hajia Mariama’s soul rest in the peace of Allah,” he added.

Vice President Bawumia in the statement announcing the passing of his late mother said her burial will take place on Tuesday, September 14, 2021, at Walewale.

It is with great sadness that I announce the passing of my beloved mother Hajia Mariama Bawumia.”

Hajia Mariama passed away peacefully this morning in Accra. Burial is scheduled for tomorrow, Tuesday, September 14, 2021, in Walewale.”

May the Almighty Allah grant her Jannatul Firdaus,” the statement said.

Hajia Mariama fondly called Maame was born on September 15, 1939, and died at the age of 81. She died two days away from her 82nd birthday.

Vice President Bawumia in a birthday message to his mother in 2019, described her as caring and supportive.

According to the Vice President, he owed his success to his mother who together with his late father laid a firm foundation for him.

“Happy 80th birthday to my lovely mum, Hajia Mariama Bawumia (alias Maame). I always thank the Almighty God for giving me such a caring and supportive mother. She has always been there for us. The pillar. I am who I am today because of the foundation she and my late father laid for me. I cannot thank her enough. Maame still plays a pivotal role in my life. Her insights are piercing. A mother’s love is truly special. Happy birthday Maame from me and all your children. We love you so much. May Allah grant you a long life and good health,” the Vice President wrote.

Hajia Mariama Bawumia is a native of Kpasenkpe in the West Mamprusi District of the North East Region and was one of the first northern female students to have gained admission to the prestigious Wesley Girls High School in Cape Coast in the Central Region.