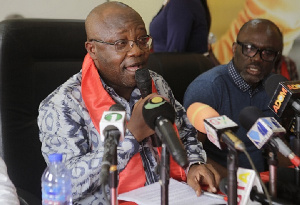 The Ghana Union of Traders has served notice it would soon start closing all shops belonging to foreigners especially, Nigerians if the task force charged to so fail to do their job.

General Secretary of GUTA Alpha A. Shaban speaking, on Frontline on Rainbow Radio 87.5Fm said the authorities have refused to implement the law, and their members are agitated.

He said the members are becoming impatient and demanding immediate action.

According to him, what broke the camel’s back was that the Nigerian Union of Traders Association in Ghana (NUTAG) has completely rejected the special dispensation offered to them by the government of Ghana after a series of diplomatic efforts by both Ghana and Nigeria governments.

Mr. Shaban said the appeal made by the government for GUTA to exercise restraints as the two sister states tried to find a lasting solution to the long-standing issue of invasion of the markets by foreign retail traders yielded no positive outcome.

He revealed that due to the call, the operations of the Committee on Foreign retail trade, which was tasked to check and close down shops of recalcitrant foreigners, was also halted, and we want them to resume or GUTA will start closing shops of foreigners.

“In view of this, we of the Ghana Union of the Traders’ Associations wish to appeal to the Committee on Foreign Retail Trade to, as a matter of urgency resume its operations without any delay as the behaviour of the Nigerian traders has seriously provoked Ghanaian traders and is reigniting agitations in the markets.”

“The Leaders of GUTA are making all efforts to calm down tempers but what we can not assure of is, to have influence again over the already frustrated and desperate traders.”

“We hereby want the world to bear witness to the fact that we (GUTA) have given some concessions to our Nigerian counterparts, but they have failed to accept for which there is nothing more we can do than to call for immediate continuation of the operations of the Committee on Foreign Retail Trade, to ensure sanity in our markets,” he said.

Anti-LGBTQ+ Bill: We won’t disappoint you; discussions will be open to media – Majority assures Ghanaians