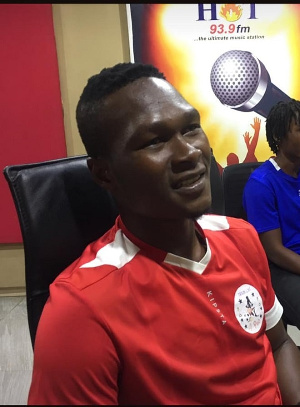 Popular Ghanaian physical trainer and CEO of Train Like a Pro GH stamina centre at Nungua in Accra, Francis Totti Laryea, better known as Totti Laryea has stated that the majority of footballers are better in bed than most macho men.

Bodybuilders have been in the news for some time now for allegedly snatching people’s wives. They are alleged to be snatching wives of married men because of being sexually good in bed.

A very typical example is the late gym instructor, Little who was shot dead in his room at Tantra Hills in Accra on Thursday, July 22, 2021, for allegedly dating someone’s wife after being warned several times.

According to reports, the said 47-year-old married woman was even with him at the time of the incident but was not harmed by the assailants

But speaking in an exclusive interview on Ashaiman TV, the physical trainer, Totti Laryea demystified that perception by stating that footballers are rather sexually active in bed than most muscular men.

“That perception that macho men are good in bed is a lie. Most macho men are weak in bed. The majority of footballers are more sexually active than macho men,” Totti Laryea stated.

The CEO of ‘Train Like A Pro GH’ explained that: “You need a lot of stamina to be good in bed – and footballers have more stamina than the macho men. Most Macho men use all their energies in pushing the metals so they become very weak…most of them can’t even do press-ups…they only have the six-packs but don’t have the stamina”.

He emphasised that most women admire footballers not just because of the huge sum of money they make but because they are also sexually overly good in bed.

Watch some excerpts of the interview below:

‘Shatta Wale speaks and dresses anyhow, the reason the industry does not attract investors’ – Camidoh

Ghanaians do not invest so much into music like Nigerians – BadYouth