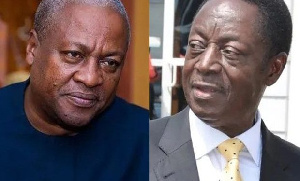 Rumours emerging from the camp of the National Democratic Congress (NDC) indicate a high profile contest brewing in the party with regard to its leadership.

These rumours indicate that a former Minister of Finance and Governor of the Bank of Ghana, Dr. Kwabena Duffour is set to contest former President John Dramani Mahama for the flagbearership position.

Reacting to this rumour, Editor of the Daily Dispatch Newspaper, Ben Ephson said it is unlikely for Dr. Duffour to lead the party as flagbearer for the 2024 Presidential race as former President Mahama will be a tough opponent to beat.

To him, former President Mahama is a tried and tested opponent and is considered a favourite by the party, and would be a prominent candidate for the NDC ahead of the 2024 general elections.

Speaking to Happy98.9FM’s Don Kwabena Prah on the Epa Hoa Daben political talk show, Ben Ephson said, “I think it will be very difficult for Duffour to beat Mahama in the primaries. Mahama came very close in the 2020 elections and almost won seats at par with the NPP in parliament. Mahama lost about 500,000 votes to President Akufo-Addo.”

Sources indicate that the General Secretary for the National Democratic Congress (NDC) Johnson Asiedu Nketia fondly called General Mosquito is lacing his boots to contest for the National Chairmanship position of the party.

According to sources, he will be backing the ticket of Kwabena Duffour who has come to save the NDC after two straight electoral defeats at the hands of President Akufo-Addo.

It is believed that in Asiedu Nketia’s camp, Elvis Afriyie Ankrah will contest for the General Secretary position whiles Kobby Barlon contests for the National Organizer position.

It is also believed the current women organizer Hannah Bissiw is also in the camp of Johnson Asiedu Nketia and will be contesting to be maintained as women’s organizer for the party as they join hands to save the NDC from John Dramani Mahama’s shackles.

Meanwhile, in John Dramani Mahama’s camp, it is said that Ofosu Ampofo will contest for the Chairmanship position whiles Fiifi Kwetey goes for the General Secretary position.