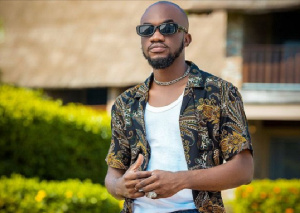 Ghanaian Highlife and Afrobeats musician Mr. Drew has shared how he got contemporary Highlife legend Kwabena Kwabena to feature on his ‘Alpha’ album.

In an interview with Dorothy Cornelius on Y107.9 FM’s Weekend Rush Show, he said, “I think I just DM’d him telling him I wanted to feature him on the song because I felt he was the perfect person to feature on that particular song and fortunately he agreed and said he was willing to support the new artistes coming.”

According to Mr Drew, Kwabena Kwabena expressed that he was happy and willing to work with him.

He described the whole process with him as fun and easy because “He already made me aware that he would love to work with me so it was quite easy and it was just straight like that and I was shocked” he said.

Mr. Drew furthered that, for someone as talented as Kwabena Kwabena who barely does any features, he was shocked at how welcoming and helpful the legend was.

“He was very welcoming and helpful he invited us to his place and we even took the vocals at his place.”

Mr Drew stated that it was an honour for him to have featured the legend on his album.

Shatta Wale lost the plot in his stunt – Arnold Asamoah-Baidoo