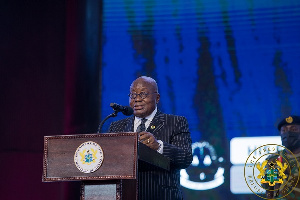 President Nana Addo Dankwa Akufo-Addo, has stated that Ghana’s democratic governance has been beneficial since independence, therefore it needs to be protected.

According to him, Ghana has seen tremendous economic and infrastructure development through its democratic governance.

President Nana Addo Dankwa Akufo-Addo made these remarks while speaking at this year’s Ghana Bar Conference in Bolgatanga, in the Upper East Region.

He indicated that, those who are opposed to the democratic system of governance will not be allowed any space to operate.

He described such persons are persons who are “incapable of effective popular mobilisation through accepted channels”.

He, then, assured that, the government will be vigilant to protect the nation against such “disdainful” characters.

“Clearly, democracy has been beneficial for the continent and for our country. We know however that the price of freedom is eternal vigilance and vigilant we shall be here in Ghana.”

“We shall not let down our guard and allow the clammy embrace of the people by anti-democrats who are disdainful and incapable of effective popular mobilization through accepted channels but who want shortcuts to power without the express support of the people,” President Akufo-Addo said.

President Akufo-Addo’s comments come after Prof Alpha Conde, was ousted by Guinean Special Forces who have since promised to change the country’s political makeup.

President Alpha Conde, in October 2020, won a controversial third term, but only after pushing through a new constitution in March 2020 allowing him to overturn the country’s two-term limit.

His actions had been condemned by the opposition and described as an abuse of power.

Conde’s inauguration was graced by prominent personalities across the world including Presidents from the African continent.

Other recent military takeovers preceding the one in Guinea were in Mali and Chad.

Meanwhile, ECOWAS has condemned the coup in Guinea and has demanded the release of Alpha Conde who was arrested by the military.

ECOWAS is further demanding a return to constitutional rule, stating that failure to do so will attract sanctions.