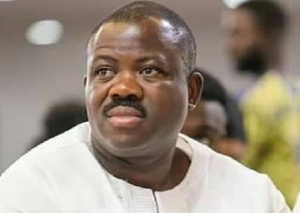 Joshua Akamba, the National Organizer of the National Democratic Congress has blamed what he labels as the ‘disrespectful’ conduct of the Reverend Isaac Owusu Bempah, on President Nana Addo Dankwa Akufo-Addo.

According to him, the embattled man of God has been emboldened to exhibit certain attributes because he appears to have the tacit approval of the President.

In an interview with Neat FM, Joshua Akamba made a listicle of instances where he contends the founder and leader of the Glorious Word Power Ministry violated the country’s law.

He alleged that a number of high-profile persons in the country have been verbally abused by Reverend Owusu Bempah.

“Nana Akufo-Addo’s god is Owusu Bempah. He moves round with impunity and misbehaves and walks freely because Nana Akufo-Addo condones such things. This has been happening since Akufo-Addo became President. He does it all the time and goes unpunished. Owusu Bempah does not respect anyone in the country because of Akufo-Addo. He insulted the Chief Imam,” he stated.

Joshua Akamba expressed that Owusu Bempah’s prophecy on the National Chief Imam and subsequent u-turn is an indication that he is a charlatan who prides himself as a man of God.

Akamba says that per his beliefs as a Christian, God does not alter his pronouncements and therefore Owusu Bempah’s retraction of the prophecy was an indication that he is ‘fake’.

“If God prophesies, nothing will make him change His mind. So that prophecy on the Chief Imam was fake. That prophecy was not from God and that’s my belief because God is truthful. When God speaks, he stands by it and nothing can change. What Owusu Bempah is doing is reflection of the abuse of right under Akufo-Addo. Owusu Bempah is one Nana Akufo-Addo’s appointees. He served on a board,” he said.

Reverend Owusu Bempah is in the grips of the police after leading an entourage of ‘junior pastors’ and some alleged bodyguards to storm the house of self-professed prophetess, Patricia Oduro Koranteng.

On Monday, September 13, 2021, he was denied bail by Accra Circuit Court which remanded him for one week.

He has been charged with offensive conduct whiles his ‘junior pastors’ have been slapped with charges of issuing threats, brandishing weapons and attacking Police officers on Sunday.

Today in History: Cashew farmers will be prosperous under my government – Mahama