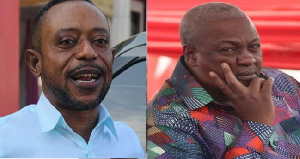 The founder and leader of Prophetic Hill chapel, Prophet Nigel Gaisie, has thrown support behind his embattled colleague in the ministry, Reverend Isaac Owusu Bempah of Glorious Word and Power Ministry.

Speaking about the recent arrest of Rev. Bempah and a subsequent decision by an Accra Circuit Court to remand him, Prophet Nigel said considering the support his colleague has given the current government and the New Patriotic Party, he was hoping the story would be different.

According to Prophet Nigel, the NPP, despite the sacrifices made by Rev. Bempah for the party, is overseeing events bringing disgrace to a man of his stature.

Speaking in an interview with Okay FM monitored by GhanaWeb, Prophet Nigel told Kwame Nkrumah Tikese that the story would have been different in an administration led by former President John Dramani Mahama.

“Last year, I more or less had exchanges with him about NDC and NPP. You think if it was John Mahama that was in power they would do this to him? I doubt John would do that. The law will work but John would be more gracious,” he said.

Rev. Owusu Bempah, ahead of the 2016 presidential election prophesied a second term win for President Nana Addo Dankwa Akufo-Addo and dared that his church building would be burnt down if his prophecy failed.

Recalling events leading to the election, Prophet Nigel stressed that the arrest and remand of Rev. Owusu Bempah could have been done in a better way.

“Of course, if he has been arrested that’s okay. It shows the law is working and the new IGP, I could see he is trying to do some good things, we thank God and we support him. But this is not a first-degree felony and considering his impact, what he has done for the current system. I am saying that they should have bailed him and self-recognisance bail would’ve been okay.

“Owusu Bempah has not run away and he is not a threat to human life, he is not a threat to anybody to a larger extent, and the law could take its full course. But to remand a man of such stature. Someone who said they should burn his chapel if NPP does not win and in an NPP tenure he is being disgraced, I mean the least said about it, the better.

Reverend Isaac Owusu Bempah was arrested together with three of his junior pastors on Sunday, September 14, 2021. The arrest of Owusu Bempah came after a series of confrontations between him and repented fetish priestess, Nana Agradaa now known as Evangelist Patricia Oduro Koranteng.