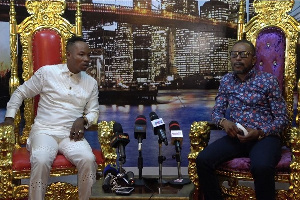 • Co-Chairman of the National Prophetic and Charismatic Council Bishop Salifu Amoako is pleading for the release of Rev. Owusu Bempah from police custody

• Addressing a press conference, Bishop Amoako cited health grounds to back his plea

• Bishop Salifu and Reverend Owusu Bempah are co-Chairpersons of NPAC

The co-Chairman of the National Prophetic and Apostolic Council, Archbishop Elisha Salifu Amoako has made a passionate appeal for the release of embattled founder and leader of Glorious Word Power Ministry, Reverend Isaac Owusu Bempah from police custody.

Speaking to the press on behalf of the association, a day after his colleague was handed a week remand sentence by an Accra Circuit Court, the founder and leader of Alive Chapel International pleaded with the court to grant Reverend Owusu Bempah bail on health grounds.

“As an organisation, we cannot just be quiet and continue to watch what is going on. As a chairman, I’ve decided to make a statement. We are not trying to fight the system; we are just here to plead. We are pleading to the IGP, we are pleading to the police and we are also pleading to the court. We are just pleading for a bail for Reverend Dr. Isaac Owusu Bempah, he is a great man of God. We all know his impact in this country, he is so great.

Bishop Amoako further pleaded to President Nana Addo Dankwa Akufo-Addo to intervene in securing bail for Rev. Owusu Bempah while assuring that NPAC will ensure he adheres to his bail condition.

Reverend Isaac Owusu Bempah was arrested together with three of his junior pastors on Sunday, September 14, 2021.

The arrest of Owusu Bempah came after a series of confrontations between him and repented fetish priestess, Nana Agradaa now known as Evangelist Patricia Oduro Koranteng.
A day after some junior pastors of Reverend Owusu Bempah were seen in a viral video brandishing guns and threatening to deal with Agradaa, the pastor and a group of men trooped to her residence to confront her.

He was reportedly rushed to the police hospital after his health deteriorated when he was taken into police custody from court.

He has however been treated and discharged and is currently back in custody.