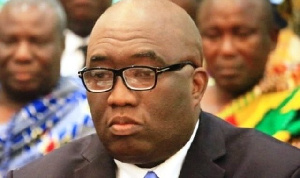 Students who developed Sartom Insectionary, an insect farm that will breed the black soldier fly for farmers who are into livestock production won the second edition of the “Africa’s Biggest Idea Challenge” at the University of Cape Coast

The Africa’s Biggest Idea Challenge is an entrepreneurship programme run by the Students Representative Council of the University of Cape Coast focused on growing Ghana beyond aid through enterprise development.

The Africa’s Biggest Idea Challenge is aimed at helping students from all disciplinary backgrounds to devise and develop innovative ideas while growing and developing entrepreneurial skills.

Speaking at the grand finale held last Friday at the University of Cape coast, Former Minister for Railways Development, Joe Ghartey said the public sector alone cannot stop the unemployment situation in the country but with the help of the private sectors many of the teeming unemployed youth can get employed.

He therefore urged students to be business-minded adding that it is the private sector that will take Ghana far.

“I am of the fair belief that the way that this country can go forward is from people like youth. The public sector cannot raise enough jobs to resolve the problem of unemployment…it the private sector that will create the jobs,” he said to the students.

In a remark, the former SRC president and CEO of Afra Cup, Dennis Appiah-Larbi Ampofo said the idea to start the Africa’s Biggest Idea Challenge is to unearth the entrepreneurship skills within students on campus which would directly or indirectly affect the country.

The participants were required to submit business ideas which are very creative and detailed.

At the end of the programme, the top teams which had the best pitches took home the ultimate prize funds of 10,000 7,000 and 5,000 respectively.