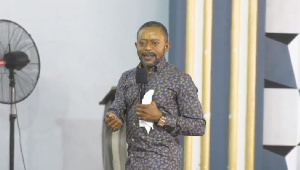 Glorious Word Power Ministries International, the church owned and operated by Reverend Isaac Owusu Bempah, has broken its silence on events that led to the arrest of its leader and its aftermath.

In a statement dated September 14, 2021, the church among other things clarified some reports about the conduct of Reverend Owusu Bempah before his arrest.

The church also gave its account of happenings on its premises on Sunday, September 12, 2021, and also rejected speculations that Reverend Owusu Bempah verbally and physically abused the police officer.

“The Church, Glorious Word Power Ministries International wishes to inform the General Public that our General Overseer Apostle Dr. Isaac Owusu-Bempah has been remanded in police custody to appear before court on 20th September 2021.

“The Church confirms that there was an altercation outside of the church premises on Sunday 12th September 2021 that got one of our Junior Pastors manhandled and arrested by some unidentified men. The manner of arrest generated a scuffle that attracted people in the neighbourhood and the church to the scene.

The church revealed that one of its pastors sustained injuries during the melee and is currently undergoing treatment at a health facility.

“We confirm that our junior pastor sustained some injuries and has since received medical treatment and is still in police custody with 3 others,” the statement added.

The Founder and Leader of Glorious Word and Power Ministry International, Reverend Isaac Owusu Bempah, was arrested together with three of his junior pastors on Sunday, September 14, 2021.

A day after, some junior pastors of Reverend Owusu Bempah were seen in a viral video brandishing guns and threatening to deal with Agradaa, the pastor and a group of men trooped to her residence to confront her.

Agradaa, however, failed to face up to Owusu Bempah but chose to stand on the balcony of her building leaving the pastor and his troop stranded at her gate.

Following the incident and the brandishing of weapons that characterized the storming of Agradaa’s residence, the Ghana Police Service picked up the Reverend Owusu Bempah and his junior pastors.

They were arraigned before a court on Monday, September 13, 2021.

Why serve students with ‘gari jollof’ every day when there is no food shortage? – Dr. Apaak to govt