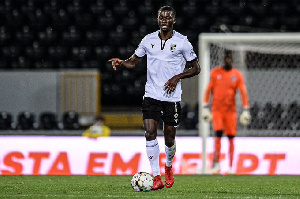 Ghanaian defender, Abdul Mumin continued with his impressive performance for Vitoria Guimaraes against B-Sad in the Portuguese top-flight league on Sunday.

The 23-year-old is currently a key figure at the back for Guimaraes since joining the club from Nordsjaelland two seasons ago.

Mumin formed a good partnership with fellow countryman Gideon Mensah who left the club after the expiration of his loan deal last season.

In the game against B-Sadd on Sunday, Guimaraes were reduced to nine men after Alfa Semedo and Toni Borevkovic were sent off in both halves.

Vitoria played with 10-men for 80 minutes and with nine men for 31 minutes but still managed not to concede a goal kind of courtesy of a world-class defending by Abdul Mumin.

The Ghana International marshaled the defense for his side as B-Sad failed to put the ball at the back of the net despite playing with a numerical advantage.

Abdul Mumin made the most clearances per the performance rating after the game with five clearances, three most interceptions,

He has made three appearances for Vitoria Guimaraes in the ongoing season.